Car magazines have been a huge part of my life and I’m perhaps a little more obsessive about them than most people.  I appreciate the digital versions of magazines and their multi-media content, but I’m old-old school and a bit of a Luddite when it comes to car magazines.  I truly enjoy receiving them in the mail and cracking open a new issue and taking a quick look-through before really digging into the articles.  It’s a process I’ve enjoyed since I was in my early teens and I don’t think that will ever change for me.  I didn’t really get interested in cars until I was about 12 and that’s when I started going through the Road & Track and Car and Driver magazines my Dad would buy.  For me, I got more interested in cars the closer I got to my 16th birthday which was in 1987 and I’m sure that’s common to most car enthusiasts.  That was a time period that just happened to coincide with the end of the Malaise Era of velour interiors and 180hp Corvettes.  Cars were getting more powerful, more aerodynamic and a whole lot more interesting as the days of metallic brown cars with tan interiors went the way of the Dodo.  With that in mind, it’s no wonder that my interest in cars wasn’t kindled until after 1984.

I have hundreds and hundreds of car magazines in my collection and pretty soon I’m going to need some of those industrial units they use to store documents at the National Archives.  It’s great to go back 20 or 30 years and read reviews of your favorite cars to learn how they were perceived at the time they were new and to read articles about the state of the auto industry and it’s predicted future decades ago.  So here’s a selection of some of my favorite magazines from the past 30 years.

So one day in the spring of 1986 I was 14 and looking for a car magazine to buy when I spotted the glossy first issue of Automobile magazine.  A quick look-through told me this was the magazine I should buy.  It was so fresh, so modern.  The glossy photos, the artwork, the articles, the advertisements.  It was more than just a car magazine.  It was an announcement to the world that the Malaise Era was over and everything was going to get better from here on out.  More than a magazine, I was holding 1986 in my hand!  The economy was better, gas was cheaper and dammit, people wanted more excitement from the cars they bought.  And for me, Junior High was almost over and I would be a high school student in the fall and another step closer to getting my driver’s license.

Automobile issue #1 holds a very special place in my heart.  I mean, look how well-worn my copy of it is.  I’ve read that issue many, many times and I fear that one day it will disintegrate.  It had everything to appeal to a 14 year-old interested in cars: The MR2 vs. 308 cover story, the return of the 911 Turbo to the US market, the new Toyota Supra turbo and a story about the Buick Grand National by someone named P.J. O’Rourke (I was 14.  I had no idea who he was).  It was all about power and speed which was right up my alley.  I began reading Automobile every month and looked forward to each new issue, the covers of which were absolutely spectacular during the first year or two of its existence.  Jean Jennings and Jamie Kitman quickly became my favorite writers and their columns were always the ones I read first in each new issue.  Hopefully one day I’ll get a chance to meet them and thank them for their great work.  I got to meet David E. Davis Jr. at an event several years ago and I was so glad I got a chance to thank him for creating Automobile.

Behold the greatest car magazine I ever bought.  Looking for a car magazine to buy I happened upon this in October of 1988.  I was 16.  Nothing could possibly get the attention of a 16 year-old car enthusiast more than a magazine called World’s Fastest Cars.  This magazine was epic and it’s still my favorite all these years later as you can see by it’s condition as I’ve read it and re-read it countless times.  This is the magazine that introduced me to the Ruf Yellow Bird, the car with the highest top speed of all the cars they tested.  211 mph, which was an incredible top speed at that time.  So many great cars were tested in this issue: Porsche 959, Ferrari 288 GTO, Aston Martin V8 Zagato, AMG Hammer and more.  Nearly 30 years later and the stats and figures are still burned into my memory thanks to this amazing collection of road tests.

Back in 1989 my Father subscribed to the British magazine Autocar & Motor which was expensive as hell because it was both British and a weekly publication.  This magazine changed my life.  First of all, getting a new magazine issue every week was, to a young car enthusiast, the greatest thing since sliced bread.  More importantly, it introduced me to European cars in a way no other magazine had.  My eyes were suddenly opened to Ford and GM cars I’d had no idea existed like Cosworth-tuned Fords and RWD Opel/Vauxhall models with inline-6 engines.   I loved reading the road tests of all these cars that were forbidden fruit to us in North America.  But like most British magazines, half of every issue was advertising and it highly biased towards British-made cars to the point of hilarity.  This is a magazine that proclaimed the Vauxhall Calibra was a BMW 850i for a fraction of the price and though it was a very attractive design at the time, comparing it to the 8-series was laughable. 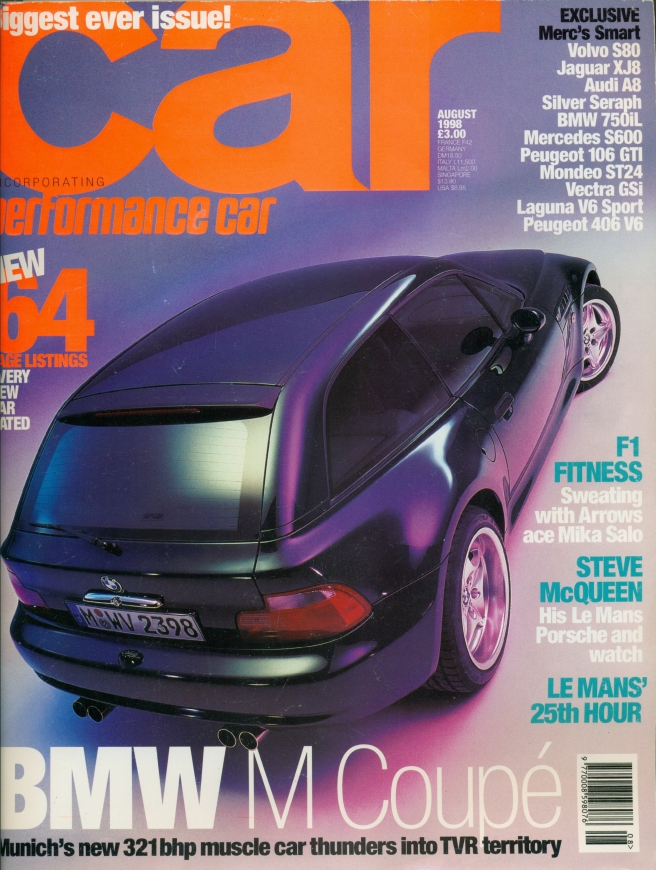 Car magazine became my favorite in the 90s and it was my go-to magazine for years and it continued the European car theme for me that started with Autocar & Motor.  For the first several years that I read it their photography was absolutely spectacular – the cars were photographed in a studio with wonderful lighting and was really a step above most magazines.  In one issue they put a R34 Skyline GT-R on a rotisserie and photographed the underside so you could see the flat bottom.  Who does that?  And they had great columnists too like the legendary LJK Setright and if you’re not familiar with him, you’re missing out.  And Jamie Kitman wrote a column in Car for a while so I was thrilled to have 2 of his columns per month to read.

What a great shame it is that Motor Trend Classic is no longer published.  This was an exceptionally good magazine – the layout, the photography and the articles were top notch.  Probably the best US car magazine ever, in my personal opinion.  Every issue had a great variety of classics from  50s classics and muscle cars to modern classics from Europe and Japan.  No matter what kind of car enthusiast you were, there was something for you in each issue and you were drawn into the other articles so you’d wind up learning about interesting cars that you may not otherwise have read about.  I miss this magazine terribly. 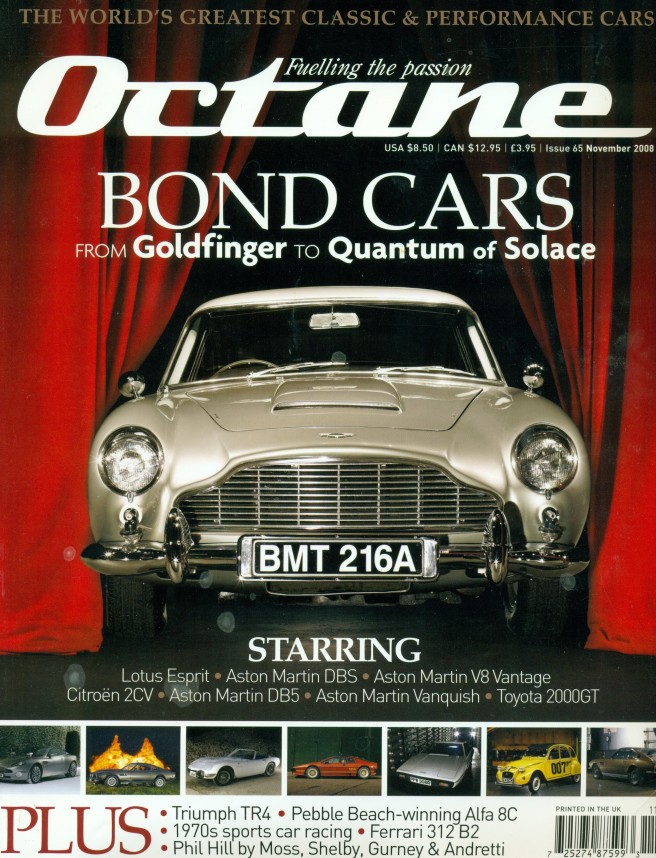 And lastly, Octane.  This is another magazine I’ve been buying since issue #1.  While I still subscribe to Automobile, Car and Driver and Road & Track, so many of their road tests are about cars I’ve already read about online before the latest issue arrives.  And to be honest, I’m really sick and tired of reading about the latest McLaren model as they seem to release one about every 2 weeks.  And I certainly do not need to read yet another road test of the Ford F-150 Raptor.  Octane, like Motor Trend Classic, has a good variety of articles and cars each month, though with a predominantly European focus.

I know the days of print magazines are numbered and I for one will certainly miss them when they’re gone.  I just hope that good writing and quality work continues to be part of automotive journalism.  There are a lot of online automotive websites that are very popular these days and while they produce interesting work, many of these sites would benefit greatly from professional and experienced editors.  I for one get tired of reading articles full of spelling mistakes and research that seems to be drawn solely from Wikipedia.  The digital medium is great but the quality needs to be there in order take automotive journalism into the future.